Kecskemét – the capital of Bács-Kiskun County – fusing all the beauty and values of the Great Plain is situated in the middle of Hungary, approximately 85 kms from Budapest. Our city – using its favourable geographical location – developed into the economic, administrative, educational, and cultural centre of the region; it gives home for several institutions of fine arts, unique collections, and dignified festivals. The name of the city originates from the word „kecske” (meaning „goat”) and „mét” means district. The goat can be seen in our coat of arms as well above the platform with the motto of our city beneath it: „Neither height, nor depth frightens us.”

The City Hall registered as the pearl of secession can be found at the Main Square. It was built between 1893-1897 according to the design of the architects Ödön Lechner and Gyula Pártos. The City Hall is one of the best-known buildings of Kecskemét, and a monument visited by the most tourists.

Franciscan Church built in the 14th century; the locals call it the Church of Friars. Originally it was built in Romanesque style and after several reconstructions it has gained its current Baroque character. A Calvary was set up at the outer wall of fit. From the point of view of religious history it is important to note that it was used both by Catholics and Protestants until 1564.

The Neo-Baroque building of the theatre built for the Millenium of the country was named after the famous dramatist, native of the town, József Katona, who was the writer of the first Hungarian national drama. Its reminiscene of the Vígszínház (Comedy Theatre) in Budapest is not coincidental: they were both built by the plans of the famous Vienna-architects, Hellmer and Fellner.

The Calvinist Church built in early Baroque style in the 1680s, the only stone church in the region during the Turkish occupation. The curiosity of the Main Square is that almost all denomination’s church can be found there, which is unique in the country.

Cifrapalota (Ornamented Palace), a unique piece of architecture, known as the masterpiece of Art Nouveau with its wonderful „waving” walls, shining roof tiles and ceramic ornaments of plants and animals. It hosts the Kecskemét Art Gallery today.

The one-time synagogue built in Moorish-Romantic style between 1861-1864. It was converted into a conference centre during the 1970s. It is known as the House of Science and Technology.

The Kecskemét Bath with a 10-lane swimming pool, a training pool, and a pool for swimming lessons opened its gates to the public at the end of 2011. The Caribbean atmosphere of the swimming pool is enriched with two water activity pools, a wave pool, an adventure pool, a climbing wall and a lazy river. The family area offers a paddling pool, an adventure pool, relaxrooms, a relax area, a baby feeding and changing room, and spa pools. The bath complex is furnished with a sauna area of special atmosphere. There is a steam bath, a jacuzzi, a bio sauna, an infra sauna, a Finnish sauna, a cold water bath and a relaxroom. There is a sauna garden as well built around a relax pool of 20-24 °C, suitable for summer- winter use.

The Aqua Park with a tempered water surface of 3315 m2 is situated right next to the Bath. Six pools, a six-lane slide, a sandy beach with mediterranean atmosphere and boating offer leisure and recreation.  www.kecskemetifurdo.hu

Further information about the City: www.kecskemet.hu

The Hotel Három Gúnár offers ideal accomodation for business travellers, tourists and groups. Our Hotel is conveniently positioned in the downtown, in an excellent spot to explore the city. With the levels of service and attention to detail, our guests are assured of genuine comfort and convenience. 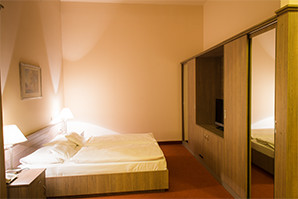 Comfort is in our focus. The equipment of our rooms is designed to provide full comfort to our guests. Every room is equipped with central heating and cooling system and temperature can be adjusted in every room. There is telephone, television and minibar in every room and in Premium rooms there is a safety box as well. Free WIFI is available in the whole hotel area.